Close to Home: The Napa Earthquake

Being a homeowner requires a lot of vigilance, there’s insurance and a mortgage, monthly payments and upkeep. And in California, sometimes it can also require picking up broken pieces of plates and glass at 3:30am after a 6.0 earthquake hits.

Over the weekend, my social media feeds were full of commentary on the massive earthquake that happened in California: the biggest one in 25 years.

It was a reminder that we can’t control mother nature and that there are downsides to living on the Best Coast. For everyone in the area, the shake hit close to home.

But for some a little closer than others. That night, I had been at my home in Napa where I would discover we lived across the street (70 feet) away from a fault line. A fault line that had been conveniently inactive for 1.5 million years. They don’t list those kinds of things in a real estate ad.

The red star is our home — see how we’re along the red fault line?

I make light of the event because, in actuality, it was terrifying. The house felt like it was crumbling. Outside, it looked like there were fireworks or lightning when it fact it was electrical lines hitting each other and shorting out. We were jolted out of our bed by a deep rumbling sound and a feeling that our house was being torn apart (we later found the earth moved as much as 2 feet). Dogs for miles couldn’t stop barking. The earthquake only lasted 20 seconds but as all us “earthquakers” know it seemed like an eternity. By the time the shaking stopped, the lights had gone out and I struggled to open the bedroom door. Entering the living room kitchen, we were almost expecting to find half the room gone. In fact, there was lots of broken wine glasses and a whole container of salsa emptied all over the room. (Note to self; put the salsa in an airtight container.)

Luckily, we had our wine stored in small refrigerators.

And it wasn’t only exciting/terrifying for us; we had some poor souls visiting us that weekend. Our good friend, Gwen, who is every bit the New Yorker and friends from Chicago staying in an RV because they were on their way to Burning Man.

After the quake, Gwen couldn’t sleep and as my partner Mark and I attempted to calm our nerves, we could hear her pacing and fidgeting. It was too much excitement even for a New Yorker. In the morning, our RV-relegated friends would say they were convinced it was going to tip over, that they would find themselves sideways before getting to Burning Man. By a miracle, they had parked their RV in the direction of the fault so it stayed up.

We were lucky, though. Despite the ten-mile line crack in the ground from the fault (see attached photos) our property was spared. And really, the dog seemed more traumatized than the guests. 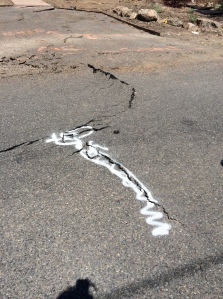 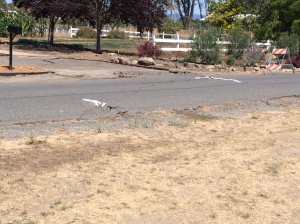 Just a few minutes of your time…

What happened to the days where you had to earn the right to complain? You could have a miserable trip on United, come home whining about the terrible flight, the food, the delays and the general attitude of the airline and when you’d have finally calmed down enough, you would then spend many hours and many phone calls trying to find who to complain to and finally—FINALLY—you’d find the address and send off a pithy and disgruntled letter. Few highs were as satisfying as when you would get an answer back, a form-style apology and a couple of thousand Frequent flyer miles for good measure.

Now, complaining isn’t satisfying, it’s a nuisance! You can barely go to the bathroom at the airport without being asked to fill out of survey asking you: “How was the service? Toilet clean enough? Toilet paper soft enough? Did you love the new scented soap? How about the automated hand drier? Take our survey. It will only take a few minutes of your time.”